Why Scott Walker is Bad for America 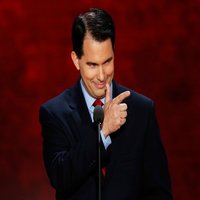 Last month, governor and prospective presidential candidate Scott Walker signed legislation making Wisconsin the 25th“right-to-work” state in the country, just years after curbing the collective bargaining rights of public sector employees in the state. Walker’s financial might was able to narrowly thwart a related recall election where 10,000 volunteers from allied labor groups knocked on 1.4 million doors and made 1.8 million calls urging citizens of the state to ouster the anti-union demagogue. If money is the root of all evil, then the $47 million Scott Walker spent on his recall election is a portal straight to Hell.

As with many laws and Republican talking points, “right-to-work” sounds like a propitious term that benefits average working people, however what it really does is destabilize unions by removing the right to collect fair share dues. By planting an Uncle Sam top hat on “right-to-work,” Republicans have constructed a caricature that the unknowing and unwise can’t help but gawk at.

Now the tyrant is taking his anti-worker message to the national stage in hopes of affixing the impressionable minds of the entire country with hogwash, however what he doesn’t realize is that even common folk are able to see fangs protruding from sheep’s clothing.

At the Conservative Political Action Conference in February, Walker claimed that overcoming 100,000 protestors in Wisconsin has prepared him for the fight against ISIS, the radical Islamic group.  Walker believes that by rolling up his sleeves and eating bratwurst, Americans will be none the wiser when he discusses things with little logic or value.

Walker may be able to survive nonsensical comments and getting ambushed by a prank that displays his resentment for working America, but when he’s contending for the presidency and advocating policies that widen the existing income gap, he’ll get trapped in a web that with enough pressure will hopefully keep him there.

What is most concerning about Walker is that, unlike his Republican rivals, he has successfully implemented policies that are merely rhetoric and wishful thinking for his opponents. He’ll be able to use his “victory” in Wisconsin to influence voters and what he hopes to be a Republican annexation in the Senate. With enough power and prestige, his large triumphs in Wisconsin become cataclysmic in Washington. There’s no doubt that he, and likely his Republican competition, will advance legislation that completely derails unions if they’re able to muster enough votes to win the presidency.

Some progressives are concerned that Hillary Clinton will be more-of-the-same if she chooses to run but it’s unlikely she would pursue shutting down unions by propagating Wisconsin’s despicable anti-worker enterprises.  In the very conceivable matchup between Walker and Clinton, the choice should be obvious.

Damon Fillman is a Staff Associate for the AAUP-AFT at Rutgers University in New Jersey. Follow him on Twitter @DamonFillman