On Tuesday, September 19, AFSCME Council 13’s Statewide Steering Committee met in Harrisburg to hear from candidates for Pennsylvania Supreme Court, Superior Court and Commonwealth Court, and vote on who the union would endorse.

The committee voted to endorse Chief Justice Thomas Saylor and Justice Debra Todd for retention, and Justice Sallie Mundy for the open seat on the Pennsylvania Supreme Court.

Also, the committee voted to endorse Judge Ellen Ceisler and Irene McLaughlin Clark for the two open seats on the Commonwealth Court. 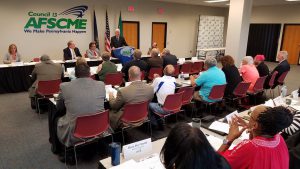 AFSCME Council 13’s Statewide Steering Committee gathers in Harrisburg to hear remarks from judicial candidates and vote on who to endorse.

Judicial races often receive less attention and lower turnout than higher profile gubernatorial and presidential races, but are just as important, if not more, in determining the type of public policies that shape American society.

From an AFSCME member’s perspective, these judicial races are crucial. The Pennsylvania Supreme Court is the body that heard the case regarding “payless paydays” in 2009, and sided with state workers, ruling that they cannot go without paychecks during a budget impasse.

The Superior Court hears civil cases, and the Commonwealth Court hears arbitration and unfair labor practice cases, so it is important to have judges with a legal philosophy that favors working people.

It is important to vote for each candidate individually, and not straight-party, as there are endorsed candidates from both major political parties. Be sure to vote “yes” on retention for Justice Saylor, Justice Todd and Judge Shogan.

Council 13 is confident these candidates are the best choices for not only union members, but all working people in Pennsylvania. Be sure to get out and vote on Tuesday, November 7. For more information on voting, and how to register, go to votespa.com.