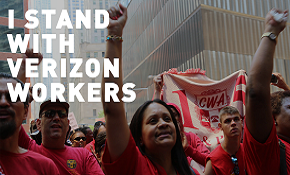 Members of Communications Workers of America (CWA) and the International Brotherhood of Electricians (IBEW) employed by Verizon continue to strike as Verizon executives refuse to settle a contract that would put many technicians and customer service representatives back to work.

Customer service and quality of service continue to dwindle as Verizon tries to fill the void with replacement workers that simply cannot perform the job as well as the unionized workers.

CWA released a statement yesterday that gives the latest on the status of negotiations.

Show your support for these workers by signing this petition.

“It is more important than ever for unions and their members to stand united with one another. Council 13 is proud to stand with the striking members of CWA and IBEW,” Council 13 Executive Director David Fillman said.

“Their fight is just, and we are with them until the workers get the contract they deserve.”