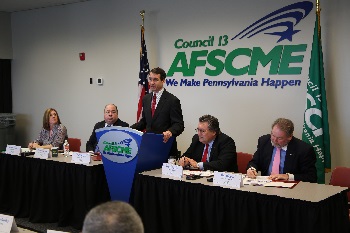 Council 13 is proud to announce its unanimous endorsement of Eugene DePasquale for Auditor General, Josh Shapiro for Attorney General and Joe Torsella for Treasurer. These endorsements follow the recent endorsement of Katie McGinty for US Senate.

Auditor General Eugene DePasquale, who is running for re-election, spoke to the committee in person. Following discussion of various issues, including privatization, the committee voted unanimously to endorse DePasquale.

“When leaders make policies, the people AFSCME represents are often the ones doing the work and making it happen,” DePasquale said.

On the topic of privatization, DePasquale said, “Anytime a pure public service is privatized, the public almost always ends up losing (revenue for the state).”

“Throughout my whole career I’ve been honored to have a great relationship with AFSCME,” Shapiro said.

AFSCME (American Federation of State, County, and Municipal Employees) is the largest affiliate in the AFL-CIO.  AFSCME Council 13 represents more than 65,000 employees in the commonwealth of Pennsylvania