AFSCME members from Local 3530 (Millcreek Township) are in the midst of tough contract negotiations with township supervisors.

The township signed two extensions since the contract expired at the end of 2016, but refuses to sign another, leaving many employees unsure of the future and demanding the township agrees to a fair, long-term contract.

In order to send a message to the township supervisors, about 50 members sporting green AFSCME T-shirts filled their meeting on Tuesday night so they could see the faces of the people they are affecting. 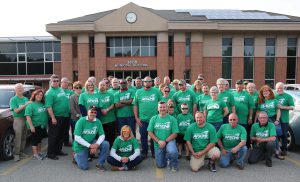 “We’re here to come together in solidarity to show the township that we’re here, and we’re not going anywhere. We’re the employees and we just want to be treated fairly,” President of Local 3530 Steve Santucci said. 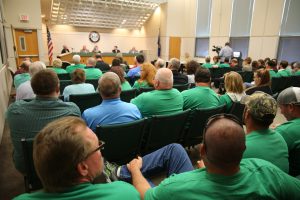 Local 3530 members fill the room at the May 23 Millcreek Township Supervisors meeting.

There are many issues at play with these negotiations, including matters of pay structure and insurance, as well as an attempt by the township to impose drastic changes on new employees from what current employees have. 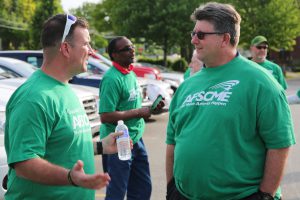 “The members wanted to come and show the supervisors this evening that the folks at the bargaining table are speaking for everybody, not just themselves. I think it shows just how important this is to our members that we have almost 50 folks here today showing their support,” Director of District Council 85 David Henderson said.

“All we want is a fair contract. We’re not looking for anything outrageous. In fact, we’ve done everything we can to meet their concerns, yet they haven’t negotiated back fairly with us at this point.”

Council 13 and the 67,000 AFSCME members around Pennsylvania stand firmly behind the sisters and brothers of Local 3530, and will never quit until they get a fair contract.