By William Kauffman on September 3, 2021

Recently in Agent Moore’s role working under the Pennsylvania Attorney General, the AFSCME Local 2245 member found himself as the lead agent on an investigation into the largest prevailing wage theft in US history. When he got the assignment, one question immediately came to mind: “What’s prevailing wage?”

The Pennsylvania Prevailing Wage Act and the federal Davis-Bacon Act were enacted to level the playing field and protect workers by ensuring that all contractors working on projects that receive state or federal funding pay the same wage rates, which can include benefits such as healthcare and retirement contributions to employees.

As a result of the Office of Attorney General Josh Shapiro’s investigation, Glenn O. Hawbaker, Inc., one of the largest contractors to complete projects on behalf of the Commonwealth, was sentenced for theft relating to violations of the Prevailing Wage Act and the Davis-Bacon Act. The company must pay $20,696,453 in restitution to 1,267 affected workers and faces several other conditions, including probation and supervision.

“It’s great that the victims were able to get money back in their pockets. They worked hard for that money, and it was taken from them,” Agent Moore said.

Agent Moore credits the success of the investigation largely to the many people he worked with to make it happen, including some fellow AFSCME members, as well as Fraternal Order of Police members and other agents who picked through the complexities of the case.

“I’m not a financial guy so there’s a lot of help from other aspects of our office that actually contributed a lot to the investigation, so I don’t want you guys to think it was just me,” he said. “It’s truly a group effort.”

According to the Office of the Attorney General, Hawbaker committed theft by using money intended for prevailing wage workers’ retirement funds to contribute to retirement accounts for all Hawbaker employees – including the owners and executives. They were also charged with stealing funds intended for prevailing wage workers’ health and welfare benefits and using them to subsidize the cost of the self-funded health insurance plan that covers all employees. The company disguised its scheme by artificially inflating its costs by millions of dollars each year and claiming credit for prohibited costs.

According to a recent report by the Center for Public Integrity, thousands of American companies illegally underpay their workers through a variety of tactics, often without punishment.

“If Pennsylvanians step up to report wage theft, know that my office is here to help. We will advocate for you,” AG Shapiro said. “If we find another business employing these kinds of schemes, we will fight to get the full paychecks you’ve earned.”

Pennsylvanians can report wage theft by sending an email to [email protected].

Agent Moore has enjoyed the challenges that his work for the Attorney General has presented since he joined the department in 2008. Before that, he served as a detective for Cambria County starting in 2004, and as an officer in Cresson, Pennsylvania, starting in 1998.

AFSCME Council 13 commends Agent Moore, his fellow agents, and all the members of law enforcement who hold criminals accountable for their actions, and we thank AG Shapiro for his sharp focus on protecting the working people of Pennsylvania. 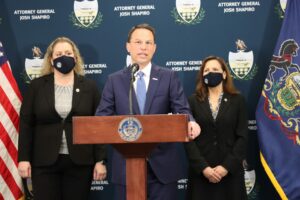 Attorney General Josh Shapiro announces the multi-million dollar theft charges against Glenn O. Hawbaker, Inc., in April 2021. AFSCME Local 2245 member and Supervisory Narcotics Agent Tom Moore filed charges against and helped lead the investigation into Hawbaker, leading to a sentencing that forces the company to pay more than $20 million to the workers it shortchanged.