Every year, the Governor’s Awards for Excellence recognize state employees for outstanding work that goes above and beyond the call of duty, saving time, money and even lives.

“These awards recognize the best of the best,” Governor Tom Wolf said.

“You are the people who make government work.”

Forty-seven state employees were recognized this year, including Linda Gagliardo, a clerk typist with the Pennsylvania Department of Education, and member of AFSCME Local 2578 (Pittsburgh State Office Building Clericals). 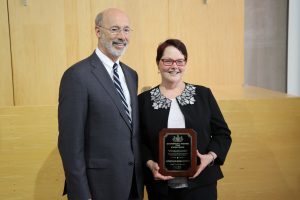 Governor Tom Wolf with AFSCME Local 2578 member Linda Gagliardo at the Governor’s Awards for Excellence ceremony in Harrisburg on May 9, 2018.

“Linda is on the front lines of helping veterans and their families make the transition from the armed forces to the workforce,” read the award ceremony’s program.

Linda reviews the paperwork of military veterans and their dependents who apply for GI Bill benefits to enroll in apprenticeships and on-the-job training.

Since she started in 2014, the turnaround time for benefit payments has dropped from three to four months to less than six weeks. In 2017, she helped 424 veterans and their dependents receive more than $700,000 in financial benefits.

Not only has Linda made the process more efficient, she has developed training documents that other states have adapted for their use.

Because of Linda and her fellow public employees, Pennsylvania can better serve those who serve the nation through military service. Thank you, Linda, and congratulations!