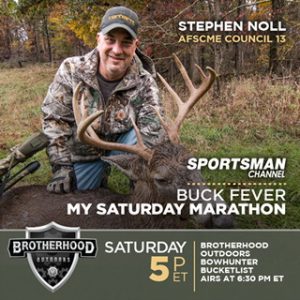 The following was released by the Union Sportsmen’s Alliance:

Noll, a prison inspector for the Pennsylvania Department of Corrections and member of AFSCME Council 13, was chosen to appear on the show based on his commitment to his profession and local community during 17 years of service.

Noll was introduced to firearms hunting by his father at the age of 16, but didn’t take up archery deer hunting until 2011 while recovering from a series of surgeries. He quickly became a diehard archer in hot pursuit of his dream to put a big buck on lockdown.

During this episode of Brotherhood Outdoors, Noll travels to the legendary whitetail country outside Killbuck, Ohio, to hunt with Wolf Creek Outfitters. Deer are plentiful but mature bucks prove elusive as the clock winds down on Noll’s adventure.

Emotions are high and the waiting games are long until opportunity finally knocks. “This was to say the least the hunt of a lifetime,” Noll recalls. “The Union Sportsmen’s Alliance did it right and gave me an experience I’ll never forget—ever.”

Award-winning Brotherhood Outdoors is currently in its 10th season of whisking hardworking union members away on action-packed hunting and fishing adventures. Produced by creative powerhouse Rusted Rooster Media, the series puts the spotlight on union members who are as passionate about the outdoors as they are on keeping the country running. Each episode takes viewers to the homes, communities and jobsites of these tireless American workers for an inspirational glimpse at their backstories before heading onto the water or into the field.

Union Sportsmen’s Alliance (USA): The USA is a union-dedicated, 501(c)(3) nonprofit organization whose members hunt, fish, shoot and volunteer their skills for conservation. The USA is uniting the union community through conservation to preserve North America’s outdoor heritage. For more information, visit www.unionsportsmen.org or connect on Facebook, Twitter and Instagram.

About Rusted Rooster Media: Rusted Rooster Media is an award-winning production house based in Midland, Mich. The creative team at “The Roost” is best known for their commitment to telling a great story, and their ability to mine every bit of human interest from every angle of the story.

About Sportsman Channel: Launched in 2003, Sportsman Channel/Sportsman HD is a television and digital media company fully devoted to honoring a lifestyle that is celebrated by millions of Americans. A division of Outdoor Sportsman Group, Sportsman Channel delivers entertaining and informative programming that showcases outdoor adventure, hunting and fishing, and illustrates it through unique and authentic storytelling. Stay connected to Sportsman Channel online at thesportsmanchannel.com.