CALL TO ACTION: Rally to Save Our Centers

Join us on Tuesday, September 24, 2019, at 1:30 p.m., on the Pennsylvania State Capitol steps in Harrisburg, as we rally to save Polk and White Haven State Centers.

The rally will follow a Pennsylvania Senate hearing on the closures that is set to take place at 11 a.m.

Elected officials, advocates, family of center residents and workers from the centers will speak during the rally. Union sisters and brothers are encouraged to attend wearing their union colors to show their solidarity.

This rally comes following The Pennsylvania Department of Human Services’ (DHS) recent decision to close Polk and White Haven State Centers. These centers are the homes of hundreds of residents with intellectual disabilities, and they are the workplaces of hundreds of union members. Residents, elected officials, the public and workers alike were blindsided by this announcement.

It is a misguided decision that will uproot and endanger people’s lives, and we are going to fight it. Are you with us? 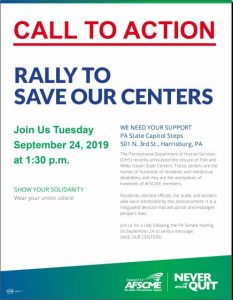