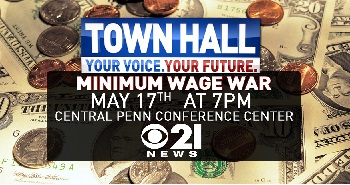 CBS 21 News presents “Your Voice, Your Future Town Hall” on the subject of the Minimum Wage.   Does it lift workers out of poverty or kill jobs?   Moderated by award-winning television journalist and radio host, Mark Hyman, the town hall looks into both sides of the controversial issue.  The town hall panel includes Kevin Shivers, Executive Director of the National Federation of Independent Business, John Meyerson, Chairman of the Philadelphia Unemployment Project, Paul Fogal, owner of Pocono Whitewater and Tina Zeigler, home care aide.  Joining them in the audience are Senator Rob Teplitz, Representative Patty Kim, Pennsylvania Secretary of Labor and Industry Kathy Manderino and CBS 21 Political Insiders Tony May and Charlie Gerow.

The issue of raising the Minimum Wage is one that draws strong emotions from each side.  With Pennsylvania Governor Tom Wolf calling for an increase to the state minimum wage and Republicans in the state House and Senate holding up bills to raise the wage, the issue has been pushed to the forefront.  This CBS 21 News Town Hall is an opportunity for citizens to speak with those intimately involved in the debate and ask questions.

The CBS 21 News Town Hall is open to the public and will be held at Central Penn College Conference Center on Tuesday, May 17th  from 7 to 8 PM.  It will also air live on My Central PA 21.2 and streamed on CBS21.com.  For more information, email CBS 21 News at [email protected].