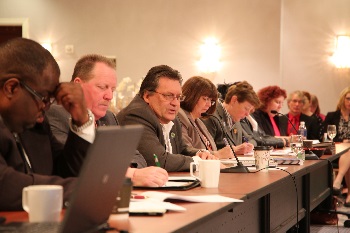 Negotiators for both AFSCME and the Commonwealth met in August 2015, and then on April 28th, May 17th and June 6, 7, 14, 15, and 20th. Council 13 negotiators and 110 Rank-and-File AFSCME members entered negotiations seeking reasonable wage increases and continuation of healthcare coverage with little to no increases in employee contributions. Negotiators also sought other items of concern AFSCME members submitted in the Contract Times surveys.

Because this proposal would significantly increase the cost of healthcare for all bargaining units, AFSCME negotiators rejected it. There were lengthy discussions about cost saving that could be achieved to avoid moving to a percent of premium. However, negotiators were unable to reach a final agreement on healthcare.

Regarding wage increases, AFSCME negotiators sought a three-year contract with reasonable wage increases in each year of the contract. Unfortunately, the Commonwealth maintained that its current budget deficit of $2 billion precludes it from making a wage proposal that the union finds acceptable. As a result, the negotiators unanimously agreed that further discussions be postponed. We are now looking to schedule future dates.

If the parties are unable to meet before the expiration of the current agreement (6/30/16), AFSCME-represented Commonwealth employees will continue to work under the conditions set forth in the expired agreement.
AFSCME-represented Commonwealth employees should feel free to reach out to their Local Union’s negotiator or contact their District Council staff representative for further updates and information.