Correctional Officer serves his community and his union 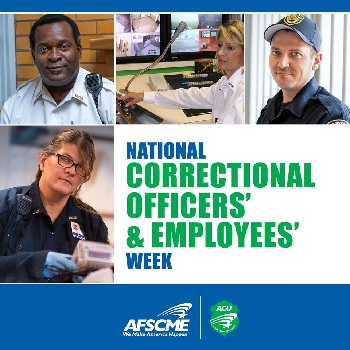 Derrick Sampson, correctional officer and President of AFSCME Local 543, Lehigh County Jail, was recently nominated as a Trustee on Council 13’s Executive Board.

“It was definitely an honor that somebody would entrust me with that privilege,” Sampson said.

“I really like what AFSCME is about. I like the resources they have, and that they make them accessible to the members. It’s a great union and I’m proud to be a part of it, and now I just want to continue being part of it, and continue making positive changes.”

Sampson, originally from Brooklyn, New York, grew up in a union household and has been a member of Local 543 since he started working at the jail in July of 2000. When he didn’t like the way the Local was being led in 2011, he threw his hat in the ring and was elected President of the Local. He has served in that role for five years, and has since become a part of District Council 88’s Executive Board and most recently a Trustee on Council 13’s Board.

Sampson spoke openly about the negative and dangerous environment correctional officers work in, but also about how union representation has made that environment safer, and made life-off-the-job better.

“With the battles that we deal with in the correctional field, a lot of people have no idea what we go through on a daily basis,” Sampson explained, detailing the risks correctional officers face, such as disease and attacks by inmates.

It is a difficult job that Sampson says is tolerable thanks to the decent pay and benefits the union has fought for. Every worker needs a union, and that fact is especially true for those in the correctional field.

“With AFSCME, we get as much security as we possibly can and that’s inside the jail and outside with our pensions; at least we have the defined benefits so we know exactly what we’re going to get. We’re not dealing with a 401(k), although I know the (State) Senate is trying to make that change, but that’s something AFSCME continues to fight,” Sampson said.

Sampson manages to do a remarkable job at Lehigh County Jail, while raising a family and being an active leader in his union. He never quits, and defines what it means to be AFSCME Strong.