Council 13 enters into negotiations with Commonwealth 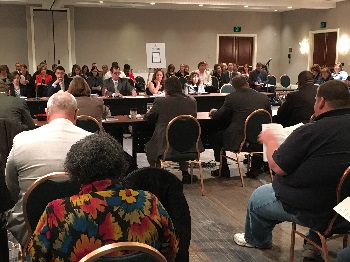 On Thursday, April 28, the Council 13 negotiating team, 110 Rank-and-File AFSCME members and 30 1st Level Supervisors, sat down across from Commonwealth negotiators to continue the process of hammering out a new contract for AFSCME-represented state employees.

This is the second negotiating session, in which the Commonwealth presents its proposals after Council 13 presented proposals in August 2015. More negotiation sessions are expected in the future, and all parties are striving to pass an agreement prior to July.

As the process begins, negotiations are not expected to be particularly easy. The state budget that recently passed without the governor’s signature failed to produce additional revenue for the state, which could put a strain on bargaining.

Nonetheless, AFSCME leadership is invested in creating the best contract for Commonwealth employees, who took a one-year extension last time around. It is the hope of AFSCME leadership and negotiators that the upcoming deal is more long-term and comprehensive.

“Times like these bring to the forefront the need to bring more revenue into the state. AFSCME members are doing the work that makes the Commonwealth happen, and they have only had to work harder in recent years,” Council 13 Executive Director David Fillman said.

“For that reason, they deserve a strong contract, and we are here to fight for that.”