“The entire Council 13 family is deeply saddened at the loss of an absolute legend and pioneer of public employee unionism in Pennsylvania and throughout the nation.

“Jerry’s remarkable legacy is still felt to this day, and will be forever, as he boldly led a drive in the late 1960s that organized more than 75,000 of Pennsylvania’s public service employees, which culminated with the enactment of collective bargaining rights for state employees and the foundation of AFSCME Council 13.

“That drive started in a cramped, one-room office in Philadelphia, where many of us happen to be right now for the AFSCME 45th International Convention – a convention which Jerry McEntee presided over many times as International President.

“Our union and our movement thrived under Jerry’s leadership. Let us gather ‘all together’ this week in his memory, then let’s bring the fight home from Philadelphia to our communities and workplaces – just as Jerry would have wanted.

“On a personal note, it is my honor to lead Council 13 as McEntee once did, and I intend to ensure we remain the powerhouse for workers’ rights that he laid the foundation for. On behalf of every member, staff, and leader of Council 13, thank you for everything, Jerry McEntee. Rest in power.” 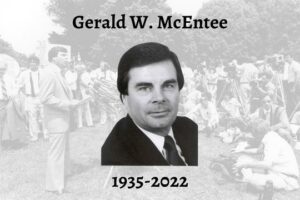