Governor Tom Wolf’s administration recently announced that they will begin on Oct. 15 to provide Commonwealth employees under the governor’s jurisdiction with up to six weeks of paid parental leave for the birth of a new child or adoption or foster care placement of a child under the age of 18. Workers employed by the three state row offices will also be provided this benefit.

Employees become eligible for this benefit after one year of continuous service with the Commonwealth. The offer replenishes with each new child, and if both parents are Commonwealth employees, they both would be given up to six weeks of paid parental leave.

This announcement came as Wolf called for the passage of legislation that would require Pennsylvania employers to provide paid sick and family leave for their employees.

“Such a policy would be the decent thing to do even without a global pandemic, but with the threat of COVID-19 still prevalent, it would make it easier for workers to stay home when sick without fearing job loss,” AFSCME Council 13 Executive Director David Fillman said.

The Wolf Administration initiated conversations about paid parental leave with the union leading up to this decision. Council 13 supports this initiative and urges the legislature to extend such a policy to all of Pennsylvania’s working families.

Unfortunately, while the Wolf Administration, pro-worker legislators, and labor unions push for policies that would protect the health and security of working families, organizations like the Commonwealth Foundation saw this as an opportunity to politicize the issue and bash state workers.

Commonwealth Foundation Vice President Nathan Benefield disparaged state workers for using their collectively bargained paid time off and for being largely exempt from layoffs, as if those are bad things. Those are the benefits of a good union, which every worker deserves.

It is not surprising to see this from a group tied to unsolicited text messages and emails to AFSCME members with deceitful information trying to get them to drop their union membership. They are part of a tight-knit network of Dark Money operations including the Freedom Foundation, State Policy Network, Free to Serve, and Opt Out Today, which have made it their mission to “defund and defang” unions.

Dark Money groups are always pushing for a race to the bottom where public service workers like those represented by AFSCME have no union, no collective bargaining rights, no paid time off, no sick leave, no family leave, and no voice on the job. They do it because it suits their billionaire donors’ agendas, but we won’t let them stop us from fighting for our members and all working people.

AFSCME Council 13 remains proud to stand on the side of working families, and we commend Governor Wolf, Senator Maria Collett (D-Montgomery County), Senator Vince Hughes (D-Philadelphia), and Representative Michael Schlossberg (D-Lehigh County), for their support on the issue of sick and family leave. 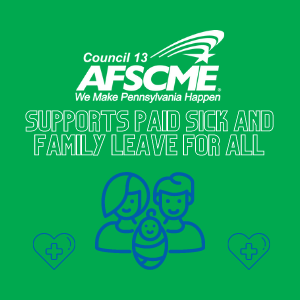