House Bill 1082 is also known as The Jake Schwab Worker Safety Bill, named after an Erie Metropolitan Transit Authority bus mechanic who died on the job due to unsafe working conditions. The bill would require public sector employees to be covered by the same health and safety standards as private sector employees are through OSHA. 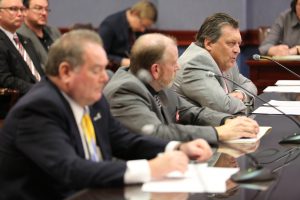 Monday’s hearing began with the bill’s sponsor, State Representative Patrick Harkins, and the widow of Jake Schwab, Tiffany, making their case in favor of HB 1082.

“After the accident, all I could think about was that no one should have to go through the pain his family and I went through. It wasn’t supposed to happen that way. Please make all workplace organizations a safe environment for everyone by voting for this bill,” Tiffany testified.

Schwab’s family was in attendance at the hearing, and shared a couple of videos of Jake, showing his loving personality, bringing many people to tears.

Fillman testified alongside Amalgamated Transit Union (ATU) Local 568 President John Renwick, who was a personal friend of Schwab, and urged the committee to stop treating public sector employees like “second class citizens” and act quickly to pass this bill.

“These workers, on a daily basis, perform some of the most dangerous jobs in the commonwealth,” Fillman said.

“Yet, they are not afforded the ‘on-the-job safety’ standards of their private sector counterparts, whether that is working on a highway construction site, a hospital setting or in an administrative office.”

Representatives from the Pennsylvania School Boards Association and Pennsylvania State Association of Boroughs testified, raising concerns over the cost of saving workers’ lives. Robert O’Brien from the Department of Labor and Industry also testified.

AFSCME Council 13 will continue to fight for worker safety, and will continue strong support of HB 1082 (and Senate Bill 580). Make your voice heard by urging your elected officials to support this legislation.