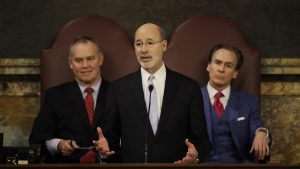 The $32.3 billion budget proposal includes a plan to tackle Pennsylvania’s $3 billion deficit with $2.1 billion is savings and $1 billion in revenue, all while maintaining no cuts in services and no broad-based tax increases.

Wolf’s budget continues the governor’s commitment to well-funded education and good services for Pennsylvania’s seniors. It also puts more resources into combatting the opioid and heroin epidemic that is affecting people everywhere.

For the third year in a row, Wolf has proposed a working family-friendly budget. With proposals to eliminate corporate tax loopholes, tax Marcellus shale drillers, offer early retirement to eligible workers and raise the minimum wage, this is a budget worth working people’s support.

“As the governor said, budgets are all about priorities, and this budget prioritizes working families in a way we strongly support,” Council 13 Executive Director David Fillman said.

“This budget proposal places value in the right things like education, senior care and combatting drug abuse, while maintaining the services Pennsylvanians depend on. It also doesn’t ask for broad-based tax hikes, and calls for a long-overdue severance tax on Marcellus shale drillers.”

It is now the duty of Pennsylvania’s legislature to work with the governor and produce a final budget that keeps working people at the top of the priority list. It is also the duty of the citizens of the Commonwealth to call their legislators and demand they pass a fair budget like the one Governor Wolf has proposed.