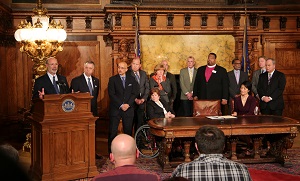 This executive order increases wages for 265 AFSCME-represented state employees. 112 tax season clerks, 81 clerks, 60 typists and 12 custodians will see an increase. Furthermore, Wolf has urged agencies outside of his jurisdiction that are not affected by this order to also raise wages, and urged the legislature to raise the minimum wage for all Pennsylvanians.

“This is a very commendable move by Governor Wolf. The economy has hit everyone hard, and most working Americans could use a raise. I hope more employers follow suit and I hope the legislature works to extend a higher wage to all Pennsylvanian workers,” Council 13 Executive Director David Fillman said.