On a sunny afternoon at Clipper Magazine Stadium in Lancaster, Pa., members of AFSCME Local 1738 (Lancaster County Prison), as well as employees from Adult Probation and Parole, the Youth Intervention Center and the Sheriff’s Department, came together for the 6th Annual Molly Curtis Softball Tournament to raise money for the Make-A-Wish Foundation. 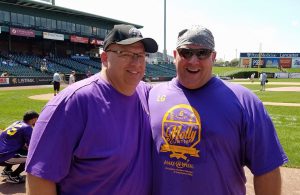 The tournament is named in honor of Molly Curtis, daughter of Lancaster County Prison employee Jason Curtis, who passed away at a young age due to epilepsy.

“It’s really cool to have Molly’s name associated with something so positive. 23 kids that tournament helped out last year. To make that many kids happy means a lot to us.” 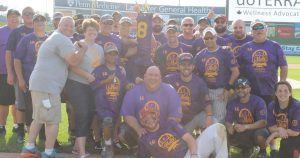 The Lancaster County Prison team after winning the 6th Annual Molly Curtis Softball Tournament, with the #8 jersey wrapped around the trophy in honor of Local 1738 member Mark Adams, who passed away in May.

This year, the Lancaster County Prison employees won the softball tournament, but everyone can consider themselves winners as they raised more than $9,000 for the Make-A-Wish Foundation. What was a fun afternoon at the ballpark means a world of difference to dozens of children.

AFSCME District Council 89 and Local 1738 are proud to have contributed to and taken part in such an uplifting event that honors Molly in the best way possible.