Custodial staff at Lock Haven University (LHU) have achieved a victory in the ongoing effort to save jobs at Pennsylvania’s state universities as their local action convinced university leadership to reconsider plans to outsource their jobs.

The jobs of about 40 custodians at LHU will remain “in-house” after members of AFSCME Local 2360 rallied with their community and gained strong public support, which led to a meeting between Local Union President Shawn O’Dell and LHU leadership where they informed her of the good news.

Shawn said she was “expecting the worst,” when she first learned of the meeting, but went on to say about the outcome, “I couldn’t be happier. I practically cried on the call I was so happy.”

“They looked at the numbers and realized $100,000 savings was not worth taking away jobs from the lowest paid people on campus and the people who are the backbone of the campus.” 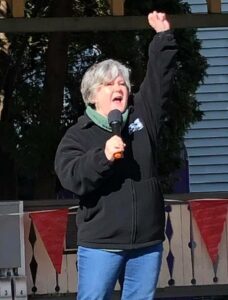 AFSCME Local 2360 President Shawn O’Dell fires up the crowd at a rally to save jobs at Lock Haven University on March 20, 2021.

LHU’s attempt to outsource custodial staff was part of a broader plan by the Pennsylvania State System of Higher Education (PASSHE) to consolidate universities and reduce the workforce by 14 percent. Sadly, system leadership is attempting to impose its plan on the backs of the faculty and staff who keep these campuses operating safely and efficiently.

PASSHE’s plan, which includes the consolidation of California, Clarion, and Edinboro University in the West, and Bloomsburg, Lock Haven, and Mansfield University in the Northeast, along with major job cuts at all 14 campuses, threatens the livelihoods of the faculty and staff at each university, jeopardizes the quality of education for students, and would bring a destructive economic impact to the campuses’ surrounding communities.

Shawn hopes the successful action of workers at LHU will inspire their colleagues at other PASSHE campuses who are facing similar issues. She also plans to continue advocating for her APSCUF sisters and brothers, whose jobs as faculty are still in jeopardy at LHU and elsewhere. Shawn is an LHU alum herself and says her professors changed her life.

“That’s how much LHU means to me, how much faculty means to me. They are not just here to collect a paycheck. They are changing students’ lives.”

AFSCME Council 13 stands opposed to any job cuts as a result of PASSHE’s consolidation plan and is ready to work with PASSHE leadership to find the best possible outcome for students, staff, and faculty alike. The union commends the collective action of Local 2360 and encourages other PASSHE locals to take similar action to demand better from PASSHE leadership.

“I do believe it made a difference,” Shawn said about the local’s activism.