Joe Biden was declared the winner of the 2020 presidential election on November 7, defeating Donald Trump. The victory came after Pennsylvania voters gave Biden the electoral votes he needed to win.

“We want to thank the poll workers and volunteers who worked tirelessly to assure votes were counted accurately, as well as the AFSCME members and Pennsylvania voters who brought home this win to make Joe Biden the 46th President of the United States and Kamala Harris the first woman of color to be Vice President of the United States,” AFSCME Council 13 Executive Director David Fillman said.

“We have a lot of work to do, but today is a good day for the commonwealth and for America, and it is time to celebrate a new era for our nation.”

His victory came after more than three days of uncertainty as election officials sorted through a surge of mail-in votes that delayed the processing of some ballots. Biden crossed 270 Electoral College votes with a win in Pennsylvania. 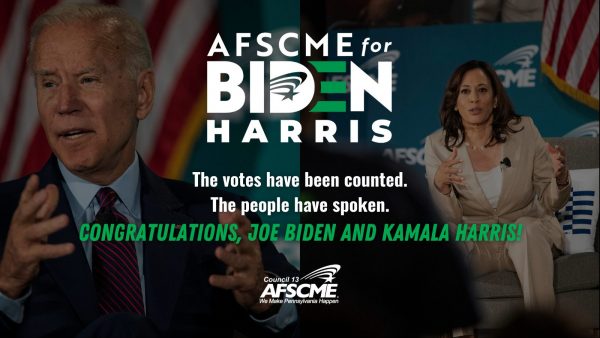