Harrisburg, PA (August 23, 2022) – Members of AFSCME Council 13’s Statewide Steering Committee, which consists of rank-and-file union members from across the commonwealth, voted unanimously to endorse State Representative Austin Davis as the next Lieutenant Governor of Pennsylvania.

The committee heard remarks from Davis at the AFSCME District Council 84 office in Pittsburgh on August 23, 2022.

“We are here in Pittsburgh, which has a deep history as a union town, and I am here to assure you that a Shapiro/Davis administration will make sure that Harrisburg is also a union town,” Austin Davis said to the committee members.

AFSCME is excited to endorse a proud supporter of the labor movement in Austin Davis.

Members of Council 13’s Statewide Steering Committee encourage their fellow union members to get out and vote for Austin Davis in this pivotal election. 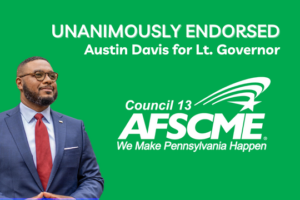