The Janus case is brought by an Illinois state employee, and is backed and bankrolled by ultra-wealthy, anti-union special interests.

In the last few days, tens of thousands of union members and activists nationwide have taken to the streets, city halls and to the highest court itself, to make their voices heard and call attention to this blatant attack on working families. 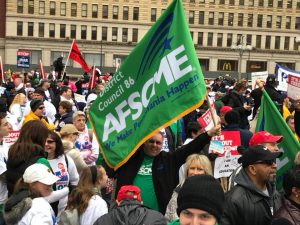 Shawn Makar of AFSCME Local 2361 (Bloomsburg University) shows his AFSCME pride at the Working People’s Day of Action in Philadelphia.

“AFSCME members are not taking this lying down. We are fighting and we will continue to fight this all-out assault on workers’ freedom,” Council 13 Executive Director David Fillman said.

“Council 13 members took to Philadelphia and cities all across the commonwealth in a remarkable show of solidarity, and we will do whatever it takes to survive a bad ruling on Janus.”

As it currently stands, each public sector employee in a unionized workplace chooses whether to join a union, but the union is still required by law to represent and negotiate on behalf of all the workers – members and non-members alike. To accommodate this requirement, the 1977 Supreme Court case Abood v. Detroit Board of Education upheld the practice of permitting Fair Share fees to be paid by non-members who still receive the benefits of representation.

The Janus case threatens to overturn that Abood ruling, outlawing Fair Share fees, and making the entire nation “right-to-work” for public sector employees. That would mean the union would still be required to represent non-members, who would be paying nothing at all, passing that burden off to dues-paying members.

Make no mistake; this is not about protecting Americans’ freedom of speech or their “right to work.” This is about dismantling public sector unions and the voices of their members. The simple truth is no one is forced to join a union and no one is forced to pay any fees that go to political matters. That is already the law of the land. Nothing in this case will change that.

This case strikes at the freedom of, and opportunity for, working people to join together in strong unions to speak up for themselves, their families and their communities.

A ruling is expected no later than June 2018, and AFSCME members should prepare for the worst by getting all their Fair Share fee payers on board as full dues-paying members. Click here to read the transcript of yesterday’s oral arguments.

The time to fight back is now.