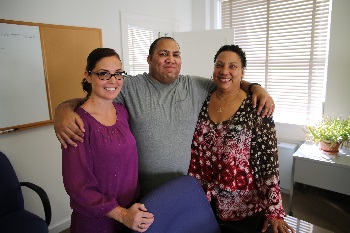 AFSCME members’ work on and off the job touches people’s lives in more ways than most realize. Whether serving the public at work, vigorously volunteering in their communities or serving our country in the military, AFSCME members are making it happen.

Take members of Local 2536, LCB/Securities Commission/Probation & Parole, President Nicole Thomas, Steward and Nicole’s son Nathan Lane and soon-to-be Secretary Jennifer Wertz for example; they currently work for the Pennsylvania Liquor Control Board (PLCB) and handle a little bit of everything, including sales, office supplies, IT equipment, and maintenance. They are jacks of all trades, an ability they credit their military service for.

Nicole and Nathan are part of a full-fledged Air Force family. Both Nicole and Nathan served, Nicole’s parents and brother all served, and now Nicole’s youngest son is in the Air Force. Nicole joined the Air Force right out of high school and worked in the Central Base Personnel Office handling administrative duties. Nathan also enlisted right out of high school, and was deployed to Iraq.

Nicole, being a true military mom and jack of all trades, worked overseas in Japan, including jobs such as a taxi driver, pizza delivery person, office worker and she ran her own daycare center before ending up at the PLCB.

Jennifer enlisted while she was still in high school, and served in the Army National Guard in Communications. She was a Signal Support Systems Specialist, fixing radios and computers, and was deployed to Kosovo for a year on a peacekeeping mission.

Nicole, Nathan and Jennifer all agree that the skills they learned in the military transitioned nicely into a more conventional workplace.

“You learn how to focus on what you need to do and put the petty stuff aside,” Jennifer explained.

Art Querry, President of Local 2163, York County Trades & Labor, finds the discipline and camaraderie found in the military carry over to his job as a Transportation Equipment Operator at York County PennDOT.  Art is keeping the roads safe by plowing in the winter, and making various repairs during the rest of the year.

“I like my job here. It’s something different every day,” Art said. 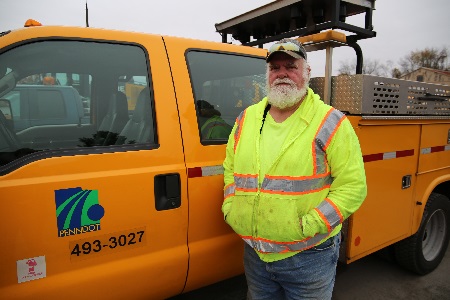 Art served in the Marine Corps. He had boot camp at Parris Island in South Carolina, went from there to Camp Lejeune for infantry training, then went to Camp Pendleton for guerilla warfare, and eventually found himself in the midst of the Vietnam War for over a year.

He worked for a printing company for 38 years following his military service, and has been working for PennDOT since 2007.

Military service and union membership run in the family for both Art and the members from the PLCB.

“Unions more or less ran in my family. My father-in-law was a union steward, and I ended up becoming a steward on the third shift (at a previous job), then I worked my way up. When I came here, I got involved, and now I’m the president of the union here,” Art said. “I’ve been involved in unions all my life.”

When Nicole Thomas is asked what she would say to her son if he didn’t want to join the union, she will tell you there is no “if,” it’s a must.

“I used to mess with her all the time,” Nathan said about his mom. “As soon as I got the job I was like ‘don’t even ask, I’m not joining the union.’ She was like, ‘yeah right, I already got your green card filled out.’”

“That’s not an option,” Nicole added.

“The benefits and stuff, you know, that was all negotiated by unions, it wasn’t just up and given to you,” Art said.

The only thing these veterans may be more proud of than their union involvement is their military service.

“The military was great. I would not change that part of my life for anything. I loved it,” Nicole said.

Military service is something you have to live to understand completely, but not to appreciate it. These veterans’ passion shined through, and their emotions showed when asked about the sacrifice so many made.

“The military, it was an experience. People have to realize where we would be without our boys that are overseas. If you go down to the veterans memorial, the guys’ names on that wall; they’re there for us,” Art said. “Some people take our freedom for granted. What we do every day, it’s all for our young guys and girls overseas. They’re the ones you have to thank.”

AFSCME members do amazing things for the public, and their military service is paramount among them. Council 13 thanks and appreciates all our members who served, or currently serve, and we wish them all a Happy Veterans Day.