AFSCME Council 13 proudly supported Wolf and Casey, and looks forward to continuing to work with them to make Pennsylvania a better place for working families and their unions. 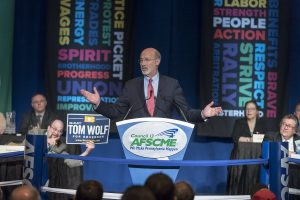 Governor Tom Wolf at the AFSCME Council 13 Convention in April 2018. 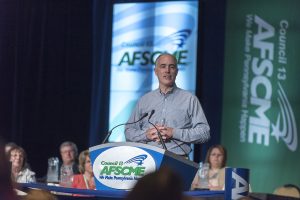 Senator Bob Casey at the AFSCME Council 13 Convention in April 2018.

John Fetterman, a strong supporter of organized labor, will be joining Wolf in Harrisburg as Lieutenant Governor.

“This was a monumental election for everyone, especially union members. In a time when organized labor is under attack from the state legislature, the Supreme Court and even the White House, it is uplifting to see pro-union candidates like Tom Wolf and Bob Casey bring home decisive wins,” Council 13 Executive Director David Fillman said.

“These wins don’t happen without the dedication of AFSCME members and retirees volunteering to knock on doors to get out the vote for our endorsed candidates. I would like to sincerely thank them on behalf of all Council 13 members.”

Now that the election is over, it is time to hold elected officials accountable for promises made on the campaign trail, and continue to fight to advance the interests of AFSCME members and all working people.

Other notable wins for AFSCME-endorsed candidates include: