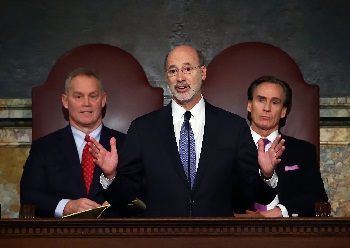 Governor Tom Wolf made his annual budget address today, in which he did not focus on a new budget proposal so much as he urged action on the previous budget that the legislature has yet to pass, a budget that was passed by the Senate and received bipartisan support in the House, but was never finally voted on because House Republican leaders went home for the holidays.

“This will not be an ordinary governor’s budget address,” Wolf started his remarks.

The governor went on to explain that our state is at a dire crossroads right now, and the two paths are action, or inaction. Inaction would be continuing the political obstruction that has caused the state to have no budget yet for 2015-16. Action would mean enacting the bipartisan budget for 2015-16, and passing a sustaining budget for 2016-17 such as the one Wolf proposed today.

The consequences of inaction are endlessly bad for all citizens of Pennsylvania, especially the underprivileged, children and the elderly.

The mathematical reality of continuing down the path the state is currently on is higher property taxes, $1 billion in new education cuts, 23,000 educator layoffs, increased class sizes, 20,000 children losing access to pre-K education, eliminated funding for state-related universities, $180 million cut to disabled and mentally ill living assistance, $90 million cut to child care, $11.5 million cut to domestic violence and rape crisis facilities, lower credit ratings that lead to higher borrowing costs and a $2 billion budget deficit on top of all that.

Instead of that destructive path, Governor Wolf proposed a budget for this year that would properly invest in education, eliminate the deficit, meet critical human service needs and get Pennsylvania on the right track to truly move forward. All of those things rely on the enactment of the bipartisan budget for 2015-16.

“If you won’t face up to the reality of the situation we’re in… if you ignore that time bomb ticking… if you won’t take seriously your responsibility to the people of Pennsylvania – then find another job,” Wolf said to the General Assembly.

With the next budget due in less than five months, and last year’s not even signed into law, there is a lot of work to do. It is up to the members of the legislature to stop the obstruction, and get serious about getting the Commonwealth fiscally on track for success.

For the full video and text of Governor Wolf’s budget address, click here.