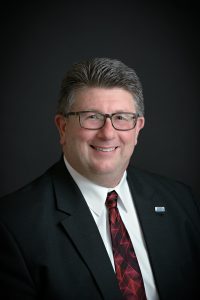 David Henderson is the Executive Director of Council 13 of the American Federation of State, County and Municipal Employees.

In November 2020, Henderson was unanimously approved by AFSCME Council 13’s Executive Board to fulfill the remainder of David Fillman’s term as Executive Director, which expires in 2022. Henderson took over the position on January 1, 2021.

Henderson is a third-generation, 41-year member of AFSCME. His grandmother was the original Recording Secretary of District Council 84 and both his parents were AFSCME members, as well as his aunts and an uncle.

He joined the union in 1979 as an employee of the PA Department of Welfare. He went on to serve as Recording Secretary, Vice President, Chief Steward and President of Local 1955 while working as a Forensic Security Employee in the H-1 bargaining unit at Mayview State Hospital.

Henderson began his career with AFSCME in 1998 as a Staff Representative for District Council 84 in Pittsburgh. He went on to serve as Director of AFSCME District Council 85 in Franklin, PA beginning in April of 2009. He also serves as an International Vice President for AFSCME.

He went to AFSCME Leadership training in 1997, was a Local Union Training Instructor (LUTI), served and testified on the H-1 negotiations committee for several interest arbitrations, served as the Chair of the Council 13 H-1 Committee, ran the Working Families program in 2000 for Southwestern PA, served as a Vice President of the Allegheny County Labor Council from 2001 to 2009, served on the AFSCME Health and Welfare Fund from 2011 prior to joining the PEBTF Board in 2016, has served as an officer of the Erie/Crawford Central Labor Council since 2012 where he was most recently Vice President, served on the Executive of Board of the Northwestern PA Area Labor Federation, and was a part of the inaugural Penn State Labor Leadership Institute in 2014 and currently sits on their advisory board.