AFSCME Council 13 and the Commonwealth of Pennsylvania signed the new state employee contract on August 28, 2019, finalizing the four-year agreement. 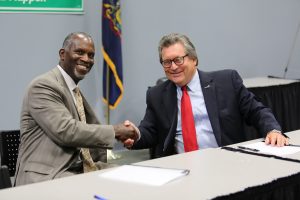 The contract, which will expire on June 30, 2023, includes a total of 16.75 percent of wage increases over the four years with no increase in healthcare contributions from employees. The Commonwealth will contribute more toward healthcare costs throughout the term of the contract.

“I want to recognize the rank-and-file AFSCME members from all over Pennsylvania who traveled to Harrisburg for numerous negotiating sessions, which produced this great deal for their fellow Commonwealth employees,” Council 13 Executive Director David Fillman said.