The Pennsylvania Senate Democratic Policy Committee held a hearing on the impact of the Pennsylvania State System of Higher Education’s (PASSHE) redesign plan on Monday, May 17. 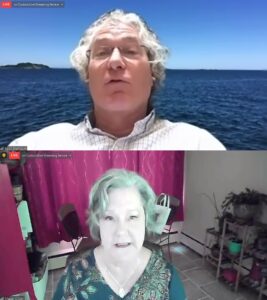 “Through my experiences, not only as a student but also as a member of the staff, I have seen firsthand the dedication of both faculty and staff on our campus, as well as the lasting positive impact they have on students,” Shawn said, sharing her perspective as both an employee and an alumna of LHU, as well as the mother of two graduates.

“That is why it is so painful to now see PASSHE attempt to eliminate the jobs of so many of those faculty and staff – especially when it is clear that not nearly enough effort was made to avoid layoffs.”

Shawn is a Clerk Typist in LHU’s Center for Global Engagement and in addition to opposing the job cuts in PASSHE’s proposal, she expressed her concerns about the impact of consolidation on an already-struggling program for foreign students.

“I believe in Lock Haven University, and now I feel like I am watching it be destroyed before my very eyes.”

Ross Brumagin is a High Voltage Electrician at Edinboro University and is on the Facilities Committee for PASSHE’s Western Integration. He shared his perspective on PASSHE’s proposal and expressed concern about the lack of detail that has been offered.

“One of my biggest issues with PASSHE’s integration plan is that it’s not really much of a plan at all,” Ross said during his remarks.

“It seems like they just want to ram this thing through and figure it out later. It leaves a lot of uncertainty in a time when we have more than enough of that. It also does not give us the opportunity to present alternatives prior to the integration, because we don’t even know what exactly integration is going to look like.”

Ross also cited a report released by the University of Massachusetts Amherst’s Political Economy Research Institute (PERI) that shows the consolidation of six universities into two, and job cuts at all 14 of the campuses, will hurt local economies in a way similar to the ongoing experiences in Pennsylvania with factory closures and job losses.

AFSCME Council 13 remains opposed to the job cuts in PASSHE’s proposal. More must be done to avoid such drastic layoffs that would pose a threat to the quality of service and education for students, as well as to the economic well-being of the campus workforce and surrounding communities.