It was already known that the Pennsylvania State System of Higher Education’s (PASSHE) “system redesign” threatened the jobs of faculty and staff at all 14 universities, but we now know the economic impact will be even worse than expected for the campuses’ workers and their surrounding communities.

A report released by the University of Massachusetts Amherst’s Political Economy Research Institute (PERI) shows that the consolidation of six universities into two, and job cuts at all 14 of the campuses, will hurt local economies in a way similar to the ongoing experiences in Pennsylvania with factory closures and job losses. This is in addition to laying off hardworking people who keep campuses running safely and efficiently, even throughout a pandemic.

“It is sad to know that PASSHE’s plan would not only harm the universities’ workers and students, but it would have an all-too-familiar impact on Pennsylvania’s communities where the effects of job losses are still being felt,” AFSCME Council 13 Executive Director David Henderson said.

“This report only reinvigorates our union’s ongoing efforts to rethink PASSHE’s consolidation plan and save the jobs of our members on these campuses.”

The abstract of the report reads in-part, “The cuts, amounting to 14 percent of overall PASSHE employment, are of a magnitude equivalent to the largest private-sector plant closings and mass layoffs of the previous decade in Pennsylvania. This study documents that the cuts and their spillover effects will have a substantial negative impact on the Pennsylvania economy. The largest negative impacts in terms of job loss and revenue decline will be in the economic regions near each university that is facing job cuts.”

The study also reveals that the system will see a 11 percent budget cut as of 2023, adjusting for inflation. Within that budget cut, 73 percent of the cuts are to personnel. According to the study, “at three of the universities slated for consolidation, Bloomsburg, Lock Haven, and Mansfield, more than 100% of the cuts are to personnel; that is, non-personnel parts of the budget are increasing while staff is being cut. At the other three universities undergoing consolidation, California, Clarion, and Edinboro, personnel cuts constitute fully 85% of the budget cuts.”

This is further proof that PASSHE’s proposed budget cuts are being levied on the backs of working people and not enough was done by system leadership to avoid job losses. In the recent case of Lock Haven University, university leadership realized the small “savings” that outsourcing custodial jobs would bring was simply not worth it, and thankfully kept those jobs in-house. That came only after the workers took action, and it is clear that further action is required to stop this destructive plan. 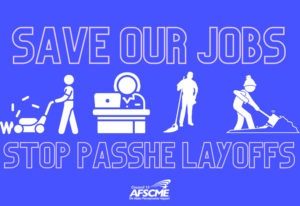