Darrin Spann was named the new Director of AFSCME District Council 90 by a unanimous vote of DC 90’s Executive Board. 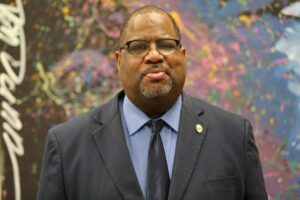 Darrin Spann will start his new position as DC 90 Director on February 1, 2021.

Spann is set to replace Carla Insinga, effective February 1, 2021, as Insinga goes on to be Chairperson of the Judicial Panel for AFSCME International.

Spann has been with AFSCME for more than 30 years in a variety of positions. He most recently served as Assistant to the Executive Director for Council 13, but he started in 1989 as a member of Local 1738 at Lancaster County Prison, where he held the positions of President, Vice President, Chief Steward, and Steward.

He went on to start his career with AFSCME in 1999 as an Organizer for AFSCME International. In 2000, he was hired by Council 13 as an Organizer. In 2001, he became a Staff Representative for District Council 89.

Spann has assisted the International Union in various areas during his time. He served as the Interim Executive Director at Council 36 In Los Angeles, California, and in 2012, he went to AFSCME International for two years to serve as the Assistant Director of Organizing and Field Services.

He has taken part in a multitude of education and training opportunities and was chosen in 2006 to attend the Harvard Trade Union Program in Cambridge, Massachusetts. He also serves as President of Harrisburg Coalition of Black Trade Unionists (CBTU).

“I cannot overstate my gratitude to the members of District Council 90 for the opportunity to represent them. I also want to thank Carla Insinga and wish her the best in her new role,” Spann said.

“I look forward to applying what I have learned in my time at AFSCME — from Council 13 to Council 36 to the International Union — and fighting for the workers who make Dauphin County happen.”