May 20 was another day of action as AFSCME representatives took their cases to Pennsylvania’s legislators in an attempt to save members’ jobs and make those jobs safer.

AFSCME Council 13 Legislative Director Michael Maguire testified to the Pennsylvania Senate Democratic Policy Committee on the need to pass Senate Bill 310, which would provide workplace health and safety protections, similar to those provided by Occupational Safety and Health Administration (OSHA), for employees in the public sector. Currently, OSHA only covers private sector workers.

“These workers are not resources. They are people,” Maguire said in response to opponents of SB 310, who referred to workers as “resources” and bemoaned the price of protecting public service workers.

“What is the price of a human life?”

Maguire also discussed the recent case of Tom Vitale, a member of AFSCME Local 2143 and an Equipment Operator for PennDOT in Luzerne County, who on April 26 was struck by an oversized load while operating a jackhammer in an active work zone. Tom was hit from behind, thrown and seriously injured. Tom has a broken pelvis and a broken back and several other injuries. Public sector OSHA could avoid future catastrophes like this.

AFSCME Council 13 has been fighting for public sector OSHA for more than 30 years, and there are no intentions to stop until Pennsylvania’s public service workers enjoy the same workplace protections as their private sector counterparts. 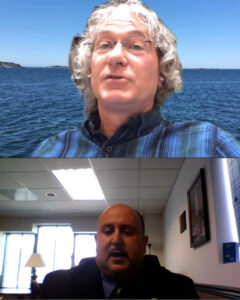 That “plan” is not much of a plan at all, Brumagin pointed out, “It seems like they are just trying to ram it through and figure it out later. It leaves a lot of uncertainty in a time when we have more than enough of that. It also does not give us the opportunity to present alternatives prior to the integration, because we don’t even know what exactly integration is going to look like.”

Clark discussed the detrimental impacts these jobs cuts would have on not only furloughed workers and their families, but on the surrounding communities of PASSHE campuses.

“The economic impact on the campuses’ surrounding communities will be deep and painful. Clarion University is the largest employer in Clarion County. That is the case for many PASSHE universities in our commonwealth’s more rural areas. To eliminate so many jobs across these campuses will hurt already-struggling local economies as well as the overall state economy,” Clark testified, citing a report released by the University of Massachusetts Amherst’s Political Economy Research Institute (PERI).

“While we are not opposed to any and all changes to the system to address its fiscal problems, we are strongly opposed to this current job-killing proposal.”

Council 13 remains opposed to the job cuts in PASSHE’s proposal. More must be done to avoid such drastic layoffs that would pose a threat to the quality of service and education for students, as well as to the economic well-being of the campus workforce and surrounding communities.